Spooky places to visit in Cornwall this Halloween

Halloween is coming and there’s no better place to be than Cornwall. Cornwall is one of the spookiest places in England, steeped in history and legend; the land and sea have many a tale to tell, and stories of ghostly goings on will always be whispered amongst the locals.

Cornwall’s mining, maritime, and smuggling history, along with a couple of historic manor houses, makes a bubbling cauldron of spooky tales!  There’s nothing better than a ghostly story, so settle down, get comfortable, and learn about the mysterious side of some of your favourite places in Cornwall.

These terrifying tales about places near to Newquay will give you some goosebumps!

Minutes from Hendra, Trerice Manor was built in 1572. It is on the site of a fourteenth century house, parts of which still exist. A must for a visit this Halloween, as you can enjoy crunching through the autumn leaves, and enjoy this charming house.

One of the last lords of the Trerice Manor, was Lord Arundell. He was commonly known to locals as ‘the wicked lord,’ due to his penchant for debauchery.

It is said that he seduced a young servant, who found out that she was with child and supposedly took her own life or died in childbirth.

Sightings of her are said to be accompanied by a drop in temperature and a smell of lilac. People say that the smell of lilac is especially strong in the library, where there is a general feeling of unease and the feeling of someone nearby.

Speculation is that this may have been where the poor maid killed herself. A figure of a lady in grey is said to walk the gallery in the North Wing and down stone steps, is also thought to be her. 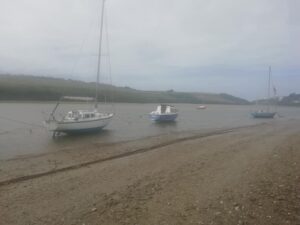 The Gannel is a beautiful place to visit, just minutes from Hendra. You can cross over when the tide is out and walk to Crantock.

The Gannel has a long history. In the industrial peak of tin mining and pilchard fishing it was often dredged  so that schooners and small barges could transport these goods up the river to be loaded on to trains, trams and road vehicles.

The Gannel is popular for Kayaking and other water sport activities. It is also a very active wildlife area with wading birds including the little egret, and fish such as salmon and bass, plus brown and sea trout.

A legendary bird called the Gannel Crake is also believed to be here. Supposedly the cry of a troubled spirit…

It has been heard throughout history and no other explanation has been given for this sound, described by a writer in the 19th Century as ‘a thousand voices pent up in misery, with one long wail dying away in the distance.’ 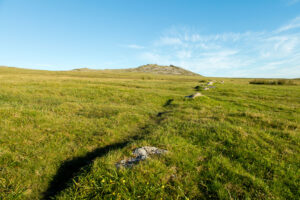 The Mysterious Moors and More…

The Moors and the North Coast are probably one of the spookiest areas in Cornwall, with the bleak and sometimes harsh Moors, and some of Cornwall’s most haunted buildings…

If you visit a pub this Halloween, make it this one. One of the most famous haunted buildings in Cornwall, famed by Daphne Du Maurier and her novel of the same name The Jamaica Inn. The remote location on the rugged landscape of the Moors makes the Inn an atmospheric place.

Built in 1750 as coaching inn it was the 18th century equivalent to a service station for weary travellers. Previous managers of the Inn have heard conversations uttered in a foreign tongue, suggested to be Olde World Cornish, and the sound of horses’ hooves and the metal rims of wheels on the rough cobbles, when the courtyard is empty. Reports of uneasy footsteps heard pacing the corridors in the dead of night and a strange man in a tricorne hat and cloak who appears and then walks through solid doors. Very spooky indeed.

This majestic Victorian house is situated in a beautiful garden and wooded estate. A fascinating insight into Victorian life; this house will be sure to impress.

But there’s also a spooky side to this house with several ghost sightings having been reported, including three ladies haunting several of the mansion’s rooms…

This is a famous haunted building, not just in Cornwall, but in the country. Recently it has been refurbished and has opened up just in time for Halloween. Built in 1779, Bodmin Jail was the site of a total of 55 executions.

This Halloween get ready for ghost walks, paranormal tours and scary cinema. Dare to visit and perhaps have a paranormal experience with a former inmate?

Want a break from ghosts this Halloween? How about witches? The Museum of Witchcraft and Magic is a one-of-a-kind museum in Boscastle, exploring British magical practice. There are a range of different artifacts and exhibitions, which are depict witchcraft through the ages, always with respect, accuracy and impartiality. There are lots of interesting objects which will be sure to delight anyone who likes learning about something a little different, and when better to learn more about witchcraft than Halloween?

The South coast isn’t safe from a few ghouls too…

The 400-year-old Ship Inn has a guardian angel in the ghost of former landlady Lil Barron.

A photograph of Lil had taken pride of place above the bar for as long as locals could remember, but when it mysteriously vanished in 2012 the Ship began to be flooded regularly, earning it the title of Britain’s Most Flooded Pub.

After the pub’s landlords discovered the photograph of Lil discarded in a back room and reinstated it above the bar, the pub has avoided flooding since where the rest of the village has flooded but the Ship remained unscathed. 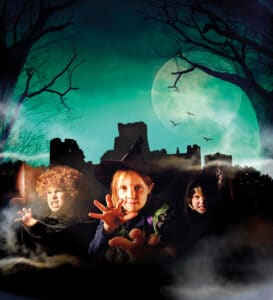 Henry the VIII instructed the construction of Pendennis Castle, between 1540 and 1542, to thwart any attempts of invasion by the French or Holy Roman Empire. It also played a vital role in World War one and two. There are breath-taking views out to sea.

Several ghosts are said to roam the former fortress, though you are more likely to hear them than see them. Phantom footsteps have been heard plodding along the staircase as well as reported piercing screams of “Maud” a ghostly kitchen maid who reputedly fell to her death.

The sound of a child laughing has been heard in certain rooms, along with footsteps of former soldiers. Other ghosts include the former head cook and a lieutenant governor.

Book a spooky visit with your little horrors this Halloween.

Book Now Get in touch
Contact us
Find us