A Halloween Half-term in Cornwall

Halloween has always been a big deal at Hendra, and Henry loves dusting off his Halloween costume, and getting on the spooky Hendra ghost train for a fantastically frightening time!

Each year, Halloween is getting bigger and better and there is no shortage of Halloween things to do in Cornwall. Here are some spooktacular ideas to keep your little horrors entertained all week long! 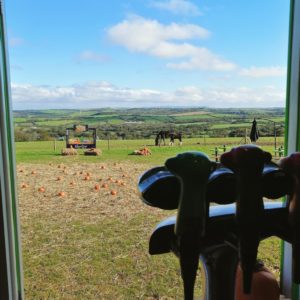 You can’t have Halloween without a pumpkin, and there’s no better way to get one than picking your own, so jump aboard Healeys vintage tractor and trundle down to the pumpkin patch. While you are there, take a photo with a scarecrow family and weave your way through the mini hay maze.

Healeys Cyder Farm has a shops, restaurants and farm animals, and what better way to explore the farm this Halloween than finding the hidden pumpkins? (maps are £1 each)

Healeys is one of Cornwall’s largest independent commercial orchards, so if you like apples then there’s 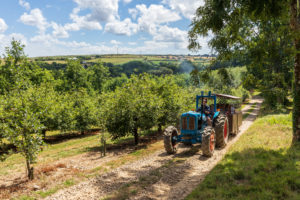 no better place to be than Healeys! There’s lots going on to celebrate apple week with the 3rd annual Apple Bobbing Championships, apple trail, juice blending bar, apple Olympics, and press your apples own demonstrations. What else do apples mean? Cider! Healeys makes Cornish Rattler, which we know to be a top tipple for visitors to Cornwall.

Can it get any better? Yes, there’s also The Old Bottlery Restaurant which serves up delicious homemade Cornish dishes and scrumptious Sunday Roasts.

Kids will be entertained, and adult’s taste bud’s will be tantalised this half-term, there’s ample parking too. Win, win, win! 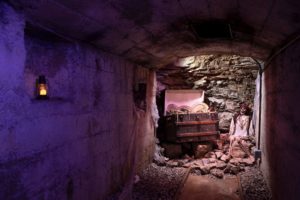 Explore the spooky candlelit tunnels beneath Charlestown’s Shipwreck Museum this half-term. Enjoy tales of shipwrecks and cursed pirate ships, in this museum which sits above Charlestown Harbour.
Charlestown Harbour is a late 18th century harbour, which remains almost unchanged since the 18th century. It is a popular filming location, with Tim Burton’s Alice in Wonderland, an episode of Dr Who, and, most famously, Poldark, all being filmed here. Charlestown is certainly atmospheric, as is the tour around the dark tunnels underneath the Shipwreck Centre. Creep around the tunnels, listen to ghost stories and sing sea shanties with a pirate, as you hear eerie echoes around the dark, twisting passageway.

Children will love spotting Captain Blackbeard’s cursed pirate ships and ghost ships around the museum, one of which disappeared 300 years ago, while looking for some treasure along the way.

There will be awful arts and creepy craft activities, including making skull and cross bone pirate masks, sailor skeletons and cobwebs – all of which are sure to frighten their friends and family this Halloween. 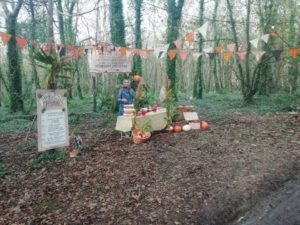 Join in this unique Halloween immersive theatre experience, in the woods. The Dead of the Night Dance is a wonderful Halloween celebration, with stories thrills, frights and delights. You can choose from several times each day, 2pm (day dance), 5pm (dusk dance), and 8pm (night dance).

Wander the woodland path and through Mr. Logan’s gate into the land where lost souls await, to lead the way and mislead you to the Dance of Dead.

This a wild blend of imagination, magic, and Halloween humour, for adventurers of all ages.

The atmosphere is playful, comic and, of course, spooky!

Tickets must be booked in advance. 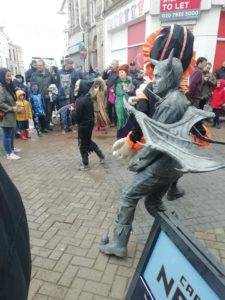 Newquay’s Zombie Crawl is a must this Halloween half-term, and it is completely free. It is time to get dressed up, as ghouls, zombies, and creatures of the night get together for a fun-filled spook-tacular parade through the town.

The day starts at 1pm with the amazing Titan the Robot, who is preforming at the Piazza, followed by a family disco with face-painting at the Cribbar.

Then at 2pm learn some monster moves for a dance workshop at Cribbar, all ready for the Zombie Crawl at 3pm, from Gover Lane, through the town centre, and up to the Hotel Victoria, where there’s a free family disco and another performance from Titan the Robot.

Book Now Get in touch
Contact us
Find us